For those of you who don't know who he is, Keith Peat is the man behind the Drive East Midlands blog and the Drivers' Union website.  A self-proclaimed road safety 'expert', Keith has a number of 'interesting' suggestions to make our roads safer (check out his sites for some real doozies).

My interest piqued with his insistence that cyclists should be banned from the roads entirely.  Sometimes he argues that this is for our own safety, to save us from having to trust the drivers around us not to, you know, mow us down.  But sometimes his veneer slips and he betrays his true motives; he just doesn't like cyclists.

Recently Keith purchased a dash cam to show examples of cyclists "using their bodies and bikes to dominate and bully car drivers".  The video below is one in which he chases down six cyclists (who have aggrieved him simply by cycling on the road) before overtaking far too closely on a blind bend.  As with his other videos, Keith blames his own dangerous driving on the actions of completely innocent cyclists who have done nothing more to earn his wrath than share a road with him.


All of this is by way of an introduction to the man (and motivation) behind this recent blog post from Drive East Midlands in which he argues that the safe distance for a vehicle to overtake a cyclist is only as far as is needed for the driver to avoid an immediate collision with the bicycle.

Let me be clear at this point that this response is, in no way, an attempt to change Keith's opinion.  Experience says that's not an option.  Instead, this is for anybody who might be looking for the logical rebuttal of the illogical.

Keith begins his blog post saying that he believes that rule 163 of the Highway Code is ambiguous.  By my reading, his confusion lies in his misunderstanding of the instruction 'Give vulnerable road users at least as much space as you would a car.

When Keith read that instruction and looked at the picture he has, wrongly in my opinion, assumed that it means you should also leave a gap of several feet between your car and another car when overtaking.

I think that what it actually means is that you should treat the cyclist as if he were in a car and pull out as though there were a car in the space he occupies. 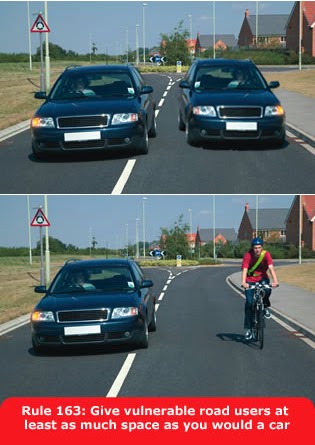 The reason for this is simple.  Cyclists do not travel in perfectly straight lines.  We may have to avoid potholes or debris on the road.  We may be caught by the wash as a large vehicle passes us by.  We may suffer sudden mechanical faults.  We need room on the road to be able to deal with these things and you cannot assume, as a driver or a cyclist, that you will have any warning.  If you doubt it, you should watch what happened to this cyclist when his crank arm snapped.

Keith says that if he has to give a cyclist this much room then in "bumper to bumper slow moving traffic" it would be impossible to overtake a cyclist.  I am, I admit, confused as to why anybody would feel the need to overtake a cyclist whilst stuck in a bumper-to-bumper queue, but even if you were so inclined, Highway Code Rule 163 has it covered:


Overtake only when it is safe and legal to do so.  You should stay in your lane if traffic is moving slowly in queues.

Unfortunately for Keith, at the core of his argument is this statement:


We must first accept that the clearance given by drivers will be entirely their judgement call and if effected without collision or causing a cyclist to fall off, it will corroborate that the driver's judgement was correct; no matter how perceived from the cyclist's perspective.  Cyclists may claim what they like but the outcome justifies the means.

I admit, I had to read this a couple of times.  My brain simply couldn't process it the first time around.  Basically, what Keith is saying here is that a driver can behave in whatever manner he chooses as long as he personally judges it to be safe.  So long as he doesn't actually have an accident then he is proven to be right and his driving is deemed to be safe.

Stating that we must accept this to be true doesn't mean that we actually do have to accept it... I certainly don't.  And once you refuse to accept this first statement, Keith's solution to the problem simply becomes irrelevant.  We don't need to rewrite the Highway Code to accommodate drivers doing whatever they want and we don't need to ban cyclists from the road to protect them from those drivers.

It's quite simple really.