I've been commuting along the A77 for about six months now. There are some pretty bad sections (the cycle lane in the door zone through Newlands; having to cross the busy road at junction 6 of the M77; having to cross again at the bridge just past junction 5) but there are some not-so-bad sections too (it doesn't get gritted or swept and is technically a shared-use path, but you so rarely see a pedestrian on the stretch from Fenwick to the East Renfrewshire Golf Club that it's practically an 8-mile long segregated cycle lane).

It might be a little controversial, but I'm going to include the Ayr Road section of the A77 through Newton Mearns in this 'not-so-bad' category.

It's important to say that this is after spending a few hours touring some of Glasgow's cycling infrastructure with Go Bike last Sunday [video/blog coming soon] and seeing what some of the alternatives, including the supposed 'Commonwealth Legacy', are like. I've come away with a new appreciation for Ayr Road, true, but it could be so very much better... and it would be so easy.

As with most of the roads around here, the combination of a lack of maintenance, heavy traffic, and patchy repairs after utilities work has left large parts of the carriageway almost unusable for cyclists. If it's not a drainage cover collapsing into an abyss it's a rut in the surface that will suck your wheels in like a tramline. As you can see, if you pick up too much pace, things are liable to shake loose and make a break for freedom...

Whilst keeping your eyes peeled for cracks in the road big enough to swallow you whole, you also need to watch out for cars parked in the cycle lane, particularly near to the various takeaways. It's supposed to be an 'urban clearway' during peak hours but that's seldom, if ever, enforced so cyclists will need to merge out into the 40mph traffic... Not pleasant when you're two miles in to a three-mile long climb.

Luckily, you won't have far to go when merging with the traffic. Although the cycle lane is, itself, reasonably wide, there is no segregation at all to protect you from the cars, lorries and busses racing past at 40mph (or faster). Mostly drivers are fine on this stretch but every once in a while somebody will cut it a little too close and you'll feel the wind from their wing mirror as it brushes past your elbow.

The bizarre part of this is that the road is more than wide enough to include segregation. In fact, it already does have it... But it's in the middle of the road, keeping drivers away from the central reservation. You can see it here, the painted cycle lane on the left, driving lane in the middle and then chevrons. 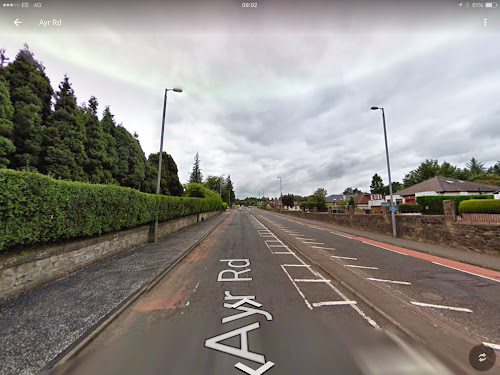 The width of this road and the marked separation of car from car really achieves only one thing: speed.

Here's the thing though. I saw a sign yesterday warning drivers of upcoming delays (won't dwell on said sign being IN the cycle lane!)... they're about to dig it all up and relay it. What an opportunity!
Straight away that should fix the problem with the road surface, so what about the parking and segregation?


Surely the common-sense answer would be to move those chevrons? You're going to have to repaint them anyway so why not just paint them between the cycle lane and the driving lane? Doesn't this look more welcoming for cyclists (excuse the crap artwork)? 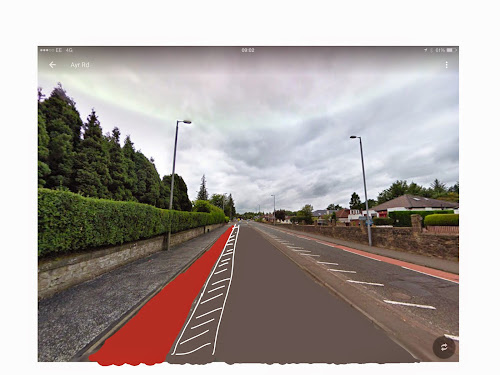 I know, it's not perfect and that there's no physical barrier, but it's not going to cost more, you'd just be shifting the existing setup around a little. It could easily then be improved on in the future with some kind of physical barrier once the budget allows and in the short term it's a psychological barrier that puts some distance between bikes and cars. How could that not be worth doing?

As for the parking... No amount of resurfacing will stop people blocking the cycle lane where fish & chips are involved, but at least this might allow them to be passed without having to pull out into the driving lane.

Posted with Blogsy
Posted by Unknown at 14:12